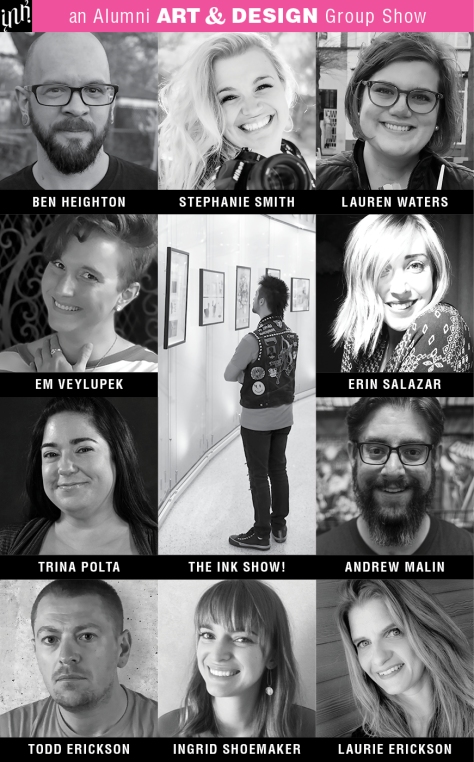 spent 25 years as a photographer, and then returned to school to round out her creative marketability. She is currently working as a graphic designer focused on package design and business identity. Laurie uses her photography background to create the dynamic images used on production packaging and other business collateral. 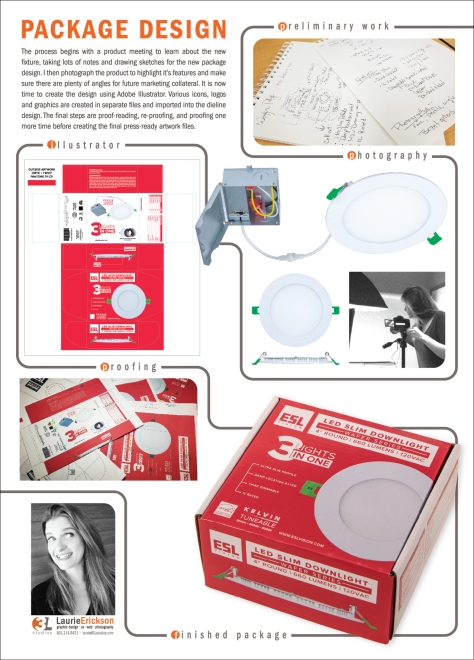 Laurie’s design process starts with the initial product meeting to learn about the new fixture and what the key features are, continues with preliminary sketches and product photography before moving on to Illustrator to create the final artwork on deadline. 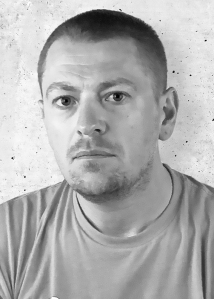 Todd Erickson has always been interested in design, photography and bicycles. He loves the way they can invoke emotion from something so simple. Todd grew up in Salt Lake City, but has lived in two other countries and traveled all around the world. Todd’s experiences as a traveler and a father are his biggest influences today. 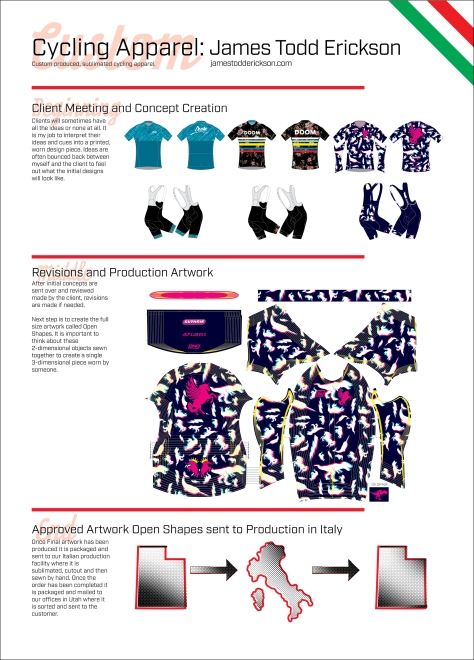 Todd is currently the Lead Designer at DNA Cycling in Sandy, Utah. He has worked for DNA for almost three years. Todd works with clients to conceptualize their ideas and branding to create cohesive designs for cycling an athletic apparel.

Ben Heighton is a Salt Lake City native. He is an artist, pressman, and graphic designer. His experience working as a pressman for many years gave him the love of printing. He began a career designing screen prints for Lone Rock Clothing.

While working, Ben also formed his own art-based merchandise company Destroy Brand Graphics, which focuses on visual puns and other designs inspired by music. His Destroy Dolls series combines Pinup and Typography focusing on the juxtaposition of concepts. Ben also works as a freelance designer creating album art, and promotional materials for Jump Up Records.

Andrew Malin is the Co-founder of Velleity Studios, a Comic Creator, and a Comic Historian. He is an award-winning screenwriter and is best known for his work on “Salt City Strangers,” “The Gull,” and “Ruthless” which he co-created with Chris Hoffman. Andrew has helped cultivate the graphic novel sections of school libraries in Utah, Arizona, & Nevada. 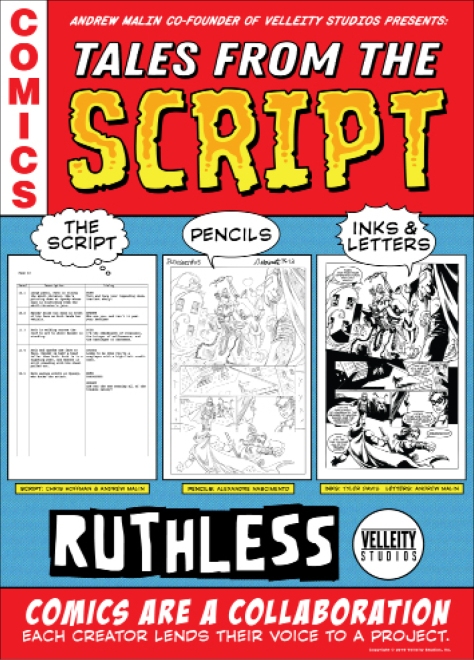 Andrew shows the process of taking a comic book from script to published work – from script to pencils to inks to lettering every artist that contributes to the book’s  production adds their interpretation. Andrew omphaloskeptically explores the philosophical underpinnings of Velleity Studios’ comic books. 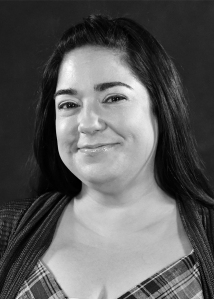 Trina Polta is currently a marketing manager after deciding to take a career leap from her former position as Institutional and Community Producer. Trina received her BFA degree from San Francisco State University in Broadcast Electronic Communications & Arts. Trina is a member of the SLCC chapter of Utah Women in Higher Education (UWHEN). 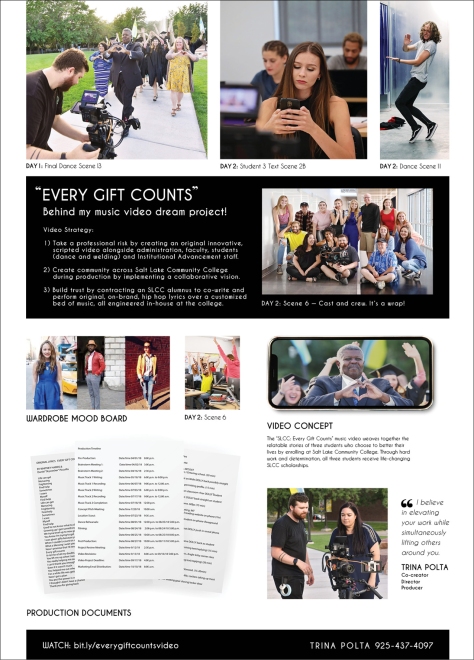 In 2018, as SLCC’s Institutional and Community Video Producer Trina made her music video directorial and producer debut. “Every Gift Counts” is an internal
marketing video thanking all those who contribute to the Employee Giving Campaign. 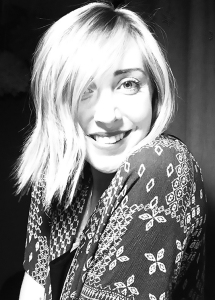 Erin Salazar is constantly concerned with making everything around her pleasurable and lovely to view. She has worked as a Graphic Designer producing environmental designs for conferences in eight countries as well as working in conceptual and corporate designs at Priority Dispatch for six years. Erin was awarded the 2018 Employee of the Year – a global recognition.

Erin as lead designer worked on this year-long project turning a Las Vegas convention space into an incredible experience for attendees. Working with vendors, hotels and budget committees, Erin says it was an exhilarating project and a huge success. 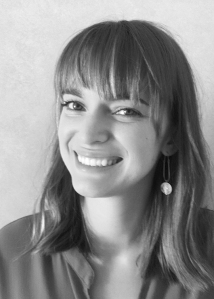 Ingrid Shoemaker currently lives in Salt Lake City with her husband and son. She runs a jewelry business named Dahlia & Violet. Ingrid began this business to help stay creative and innovative while also working full time as a stay-at-home mom. 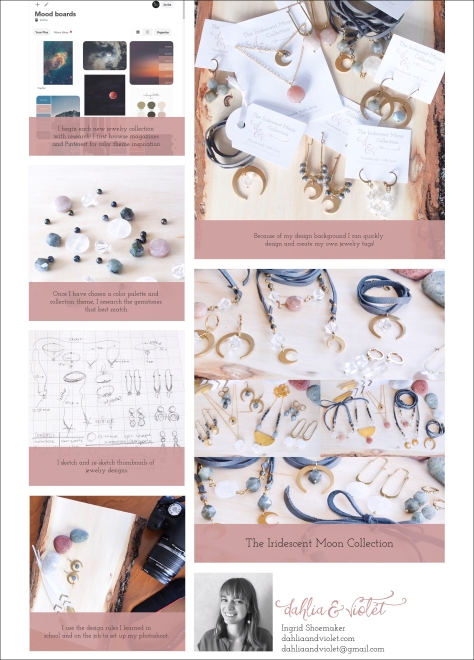 Ingrid uses the same design rules, theories, and processes to design, create, and market jewelry for Dahlia & Violet. This piece shows her most recent collection “Iridescent Moon.” The designs feature moon shapes in various phases with a muted autumn color palette. Ingrid uses skills learned in the VAD program to set up and photograph the products for her business.

Stephanie Smith has always had a passion for design & photography. In early 2018 she opened Stephanie Smith Photography specializing in Family & Bridal/Groomal portraiture. She works full time and loves to tell a story through the lens of her camera. Stephanie lives in West Valley City with her husband and five kids. 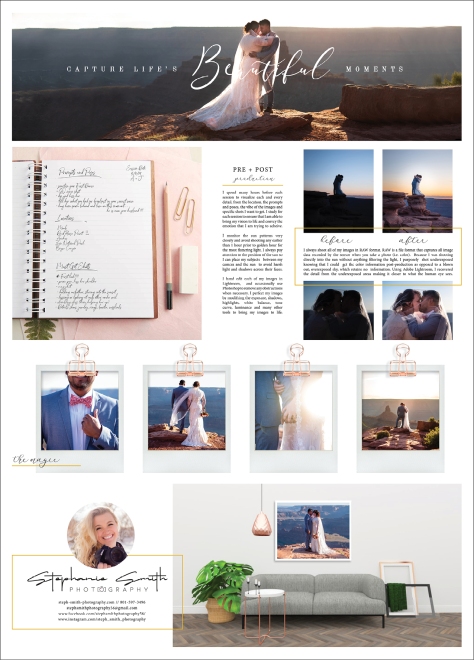 With this piece, Stephanie shows the process of how her work is born from the vision of each session; drafts of prompts and poses, scouting locations, monitoring light patterns, and the many hours of post processing through Adobe Lightroom & Photoshop. 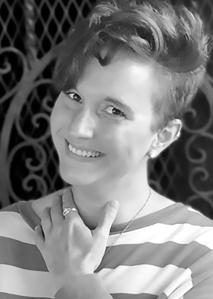 Em Veylupek draws on her experience navigating life with PTSD, Depression and Anxiety for her work. Em chooses painting, lettering, woodworking and dance to express how she relates to her mental health and the world. Em creates with the goal of expanding the discussion around mental health & building community. Em currently lives and works in San Francisco, CA. 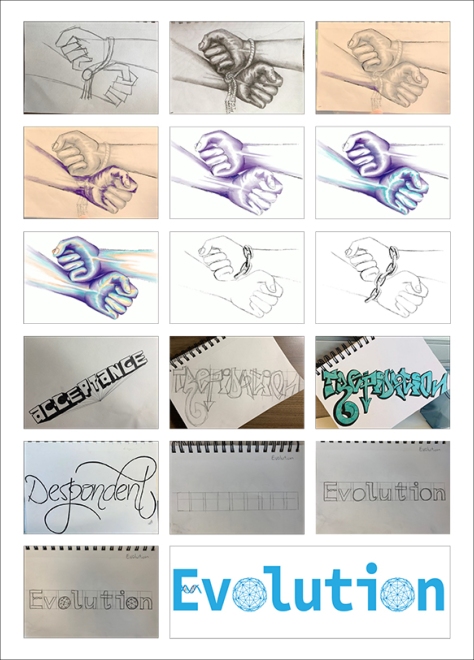 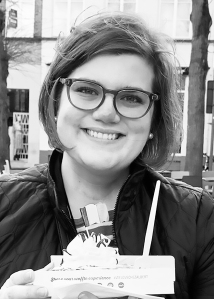 Lauren Waters resides in Taylorsville, UT. Currently an Art Director at American Crafts she works with a team designing and illustrating paper collections. These collections can be seen in retail stores such as Michaels Crafts and JoAnn Fabrics. Lauren enjoys collaborating with other talented designers and finds it’s one of the best ways to learn new techniques.

A paper collection includes patterned papers, stickers, and other embellishments. As with any product design one must always think of the end user. Lauren and her team are involved in these collections from start to finish from the manufacturer! 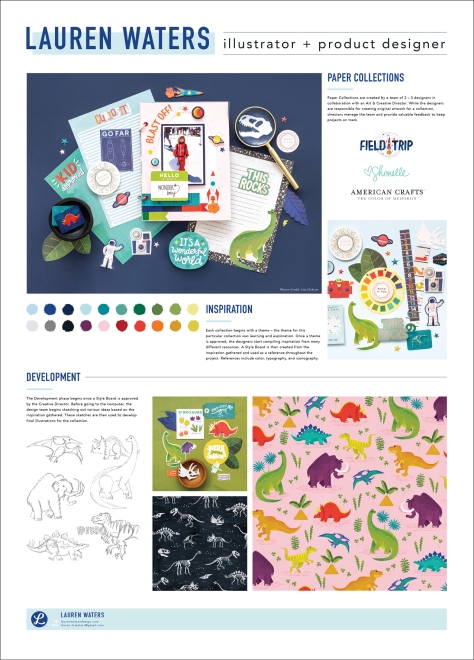 To read more about The INK Show:
INK Show